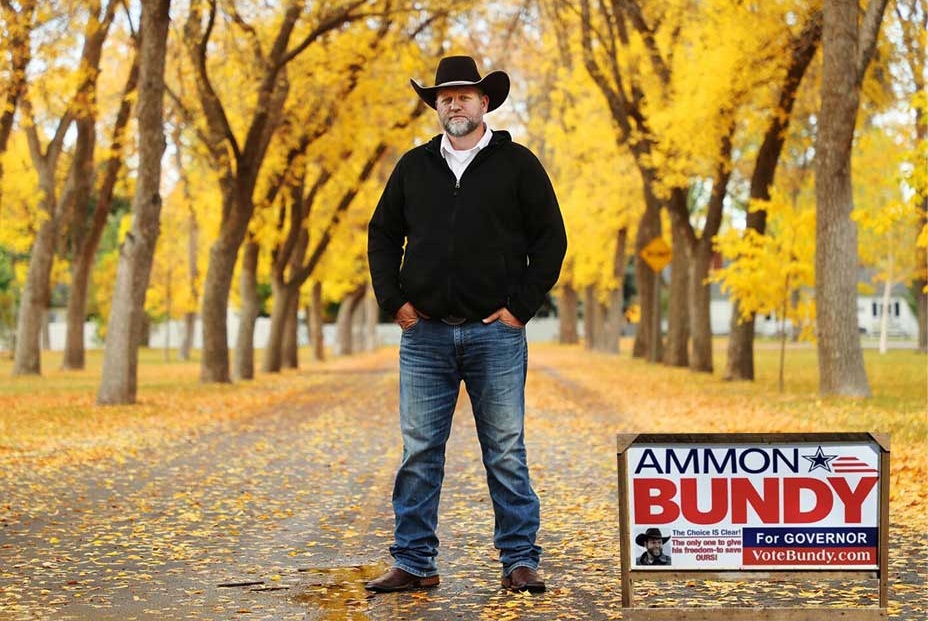 TPP: What is the number one reason every Idaho voter should vote Bundy?

Ammon: Because I’m not afraid. I’m willing to defend their families, property, their right to worship, travel, and trade with each other. I’ve proven I’m willing to do that.

Ammon: Idaho going down the path of Oregon or California, with our increased welfare programs and size of government. Little’s claiming a surplus, but he received over $18 billion from the Federal Government, increased the size of government and made it look like a surplus.

That money’s going to run out, and then the people are expected to support these programs. That’s a huge threat. Idaho hasn’t paid its own bills for 38 years. We’ve had to go back to the federal government to get money so that we can pay our bills and it’s going to be worse after the COVID money runs out.

TPP: How would you keep money in the average Idahoan’s pocket?

We’re attracting those who are coming for our welfare programs. Idaho has increased its food stamps program by 24.2%, more than any other state in the United States. Governor Little’s pumping millions of dollars into free government housing, $50 million.

If we want to preserve our conservative values, then we have to stop attracting the people who want to come here and live off the state. Also, we need to take back our lands from the federal government. 61% of our land is federally controlled.

If you look at a map of all the minerals that are in Idaho, it’s tremendous. We have trillions of dollars-worth of minerals here in Idaho. We’re resource rich. Natural gas, timber, water, and the federal government is not allowing the people of Idaho to benefit from it.

The amount that it takes to take care of the land and the resources in the forests are so minimal compared to the value in them. That’s partly why we’re having our affordable housing crisis. We’re buying lumber out of Canada and paying four times the price.

We can’t harvest our own minerals. We’re buying all this stuff out of the country or out of the state. And more importantly, the people of Idaho can’t benefit from it. For example, the cobalt deposits in Idaho are the richest cobalt deposits in the United States, and the federal government leases them to an Australian mining company.

On top of that, our forests, rather than using them, they’re burning up– killing our wildlife. It’s detrimental to hunting, hiking, and fishing. I propose we go back to the multiple use doctrines that we used to have. People were hunting, hiking, fishing, camping, enjoying it right alongside the loggers, ranchers, and miners on that same area.

TPP: You say you want to eliminate property tax. Where will Idaho get the money to maintain roads, schools and other government services we already take for granted?

Ammon: Through a consumption tax. It more than compensates for the legitimate expenditures of government. I go into a lot of detail about it on votebundy.com.

TPP: On day one, you would end abortion by executive order. Are there any exceptions in the case of rape or incest?

Ammon: No. I have seen too many abortion videos, too many ultrasounds. There’s some really horrific things that go on when it comes to abortion. I don’t believe that taking the most innocent life for any reason is correct.

And there’s so many testimonies of those that have been raped or otherwise that chose to have the baby. They might have given the baby away or raised that baby and they were healed through that process. Those that actually aborted the baby were further violated and emotionally harmed.

TPP: From trans swimmers to drag queen story hour to pornography freely available to children wherever they go, we seem to be in the world of confusion and chaos. Where do you think the impetus for this message comes from? Why do you think they are targeting our children?

Ammon: I do believe in good and evil. I believe God created this world and that he is the author of good. And I believe there is an adversary. People call him by many different names. I believe that there is a force and a war that is taking place.

It’s always been that way between good and bad. I believe that many of these people pushing these things to further these agendas are ultimately motivated by the adversary.

I don’t believe that there is anything good about trying to introduce a seven-year-old to sexuality and men dressed up as women going in his classroom and trying to somehow make him feel like it’s normal.

That’s a wicked agenda. Everywhere teaching and reading the Bible has become illegal is where this new theology is found.

We need to drive that garbage out of the schools immediately. Every day we’re losing more and more to this wicked, incorrect theology that God made a mistake and somehow you’re not important enough or good enough and you have to make yourself something you’re not.

We have to clean our schools up, but we also must strengthen our families. Mothers and fathers are going to work 40, 50, 60 hours a week and the children are left at home. And then they come home, they’re worn out. They go to bed or they watch their show and they go to bed. They get up before the kids and they do it again. And there’s very little influence on the children as to what’s right and wrong.

I think that goes right back to we should be able to benefit from the wealth and resources in Idaho. One breadwinner should provide for a family well enough. If you deteriorate the family unit, you have nothing in society. Everything becomes devalued.

TPP: What do you think is the biggest failure of Little’s term?

But when you look into why he did it, he says himself word for word, and I’m going to quote him, “The emergency declaration served as an administrative function to recoup FEMA dollars for a variety of needs throughout Idaho.”

He declared a state of emergency in Idaho that had nothing to do with the health and safety of the people. It was to recoup federal dollars for a variety of his pet projects. He said that in a press release in March 2020. He took that money and increased the size of government more than any other governor in the history of Idaho.

TPP: Are you concerned about Idaho’s energy production? Are we in danger of being arbitrarily cut off from power like some other states have? Is there any way to safeguard cheap, reliable and safe energy?

Ammon: Hydropower is our number one source of energy and we already have congressmen like Mike Simpson trying to cut off our new dams. Governor Little says nothing about it and is campaigning and being friendly with Mike Simpson. We have every reason to believe he has the same agenda as him.

We have a tremendous amount of other energies we can use. We’ve got a lot of good hot water coming out of the ground that can create pretty much free geothermal energy. We have hot springs everywhere and it wouldn’t even affect us using and enjoying the hot springs. We also have a ton of natural gas in Idaho. The Idaho power bill should be way lower than it is.

TPP: With World War looming on the horizon, what can we do in Idaho to prevent or prepare?

Ammon: We become much, much more independent. Why don’t we have fuel refineries right here in Idaho? Why don’t we harvest our natural gases and use them?

Why don’t we harvest our own timber? If the world comes crashing down or it has a big economic crash we’re not affected so much because we’re able to produce a lot of our own goods.

TPP: The courts in Idaho often appear to be operating outside the scope of their judicial authority. What can be done at the executive level to ensure that our checks and balances and remedies are available to the people?

Ammon: The governor has the power to pardon. If he’s pardoning people that were prosecuted and found guilty of, for example, going to a meeting during COVID without a mask, then I’m going to pardon those people. It sends a message to the courts and to the prosecutors that if they try to prosecute these type of cases, the governor is just going to pardon them.

TPP: What would you do to flush out the corruption that’s rampant in Idaho and move towards restoring constitutional order?

Ammon: The executive branch is where many of the abuses are coming from. That is a direct responsibility of the governor. Changing the heads of these agencies in these bureaucracies, cleaning them out, minimizing the size and the spending, even eliminating some of them is something that I intend to do and a good governor would do.

TPP: Will you ever re-register as a Republican?

Ammon: Possibly. I see things happening in the Republican Party that I like, something I couldn’t say even a few months ago. The Republican platform, I believe, is by far the best platform of all the parties in Idaho, so I would not rule it out.

TPP: Is there anything we haven’t asked about, but you feel you need to address?

Ammon: I believe that the best way to spark an economy is to foster entrepreneurs, deregulate and give access to the tools, natural resources and the things they need.

These governors, they get away with saying, “Hey, we’re bringing a big corporation. That’s what we’re going to do for jobs in the economy.” That’s a terrible economic development plan. Terrible. All it does is bring a big corporation they give tax rebates to and they create middle to low level jobs. It does very little for the people of Idaho.

It just enriches the corporations. The way to truly spark an economy is to foster entrepreneurship, deregulate, and then make sure they have access to the natural resources so that they can start to really invent and do things. I mean, like in this area you see up on the hills, that’s silica sand.

We have some of the best silica sand in the world. Someone might want to start a glass business, making glass. But the federal government claims that and won’t let us harvest it. Well, let’s use it. How many jobs, how much opportunity and how much wealth is lost simply because we can’t use our resources? How many would benefit from that? The cost of housing goes down, jobs are provided, wealth is in a community, a small community. A community like this starts to flourish. That’s how you build an economy.

Get TPP mailed to you!